I owe this special entry to my loyal blog stalker. I’m sure he must be grinning ear to ear while reading this. Yes Yang… sila lah baca senyap2 lagi ye ;P On Friday, July 9th, 2010 hubby turned 27 years old. So on the day before that I managed to bake a birthday cake for him. It was an ordinary chocolate sponge cake layered with peach in syrup and covered by chocolate whipped cream. I kept remembering that he likes cheesecake and cake that covered by cream or topping. I was quite sure which recipe to follow for the cake and the cream frosting except for the decoration on the cake. There were so many beautiful example that caught my eyes but due to lack of ingredients and obviously skill, so I thought I dare not to ruin the cake instead. So despite of numerous reference on the internet beforehand finally that was the best cake I could come out with on that day. But at least now I know how to make rosette using correct technique although the rosettes I made as in the picture are far behind from perfect 😛
Hubby’s 27th Birthday Cake 🙂 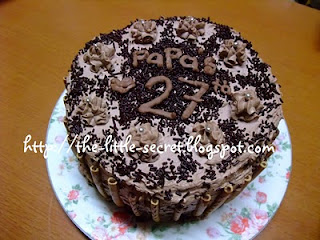 Papa is cutting the cake while the son is still digesting what is going on. Rasanya dia baru bgn tdo. Xingat plak. That’s why mcm blur je tu. 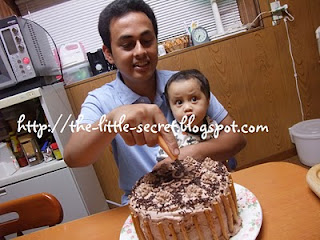 Inside of the cake. 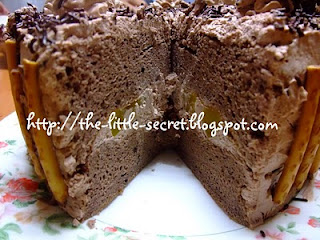 Actually it is the recipe for Fruit Roll Cake but I altered the recipe a bit to make the cake as above. I chose this recipe because it’s actually tastes just nice and contained only a small amount of sugar. So it’s suitable for hubby who is on diet. By the way, hubby was on leave on his birthday because he needed to go to renew his license. He went out early in the morning and only to come home at about 7.00 pm. It took long time because he needed to attend a 2 hours class plus the place is quite far from home in another city. At first I thought of making a small celebration for him by preparing some special dinner. But he supposed to go for barbecue with his department’s colleagues on that night. So after wishing him ‘Happy birthday’ on the night before, I helped him to cut and marinate some chicken and beef. But turned out he didn’t go for the barbecue because he reached home quite late and it was raining heavily anyway at that time. Actually he was already reluctant to go since earlier but since his colleagues insisted so that’s why he thought of going. If only I knew, I would have preceded with my own plan hihi 🙂

So we cut the cake only after he came home and after eating some of the cake he went for barbecuing with the trainees at the house behind instead. So I didn’t cook on that day because hubby sent some chickens and beef for me. Furthermore we got plenty leftovers in the fridge so I thought we better finished up whatever we had first. I plan to make something nice tomorrow because it’s gonna be Friday and he’s not working on this Saturday. I plan to make some chicken chop. It’s my first time anyway and I really wish it’s gonna turn nice 🙂 You see, I haven’t made the chicken chop yet but gonna published this later so that I can put the chicken chop picture in here 😀 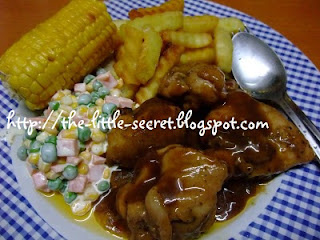 This year’s birthday although very simple but felt totally different for me. I didn’t know what’s hubby might have in his mind. But I felt so happy and bliss seeing him celebrating his birthday with our beloved baby, Ihsan in the picture and especially the part when he cut the cake while holding Ihsan was extremely priceless 🙂 His 26th’s birthday last year was a happy one indeed. But I kept remembering his 25th birthday on 2 years ago which felt very somber to me. I don’t know about him but his expression somehow did tell the same. Just in case you didn’t get the idea… it was 2 months after I gave birth to our late first child, ‘Abid. So of course his 25th birthday held in a totally different environment not as how I had imagined and wished long before that.

Anyway Yang… although I’d wished you earlier but now I want to wish you again Happy 27th Birthday! You’re old! 😛 But I wish to celebrate more of your birthdays in years to come. Perhaps someday we could witness 100 candles on your birthday cake the same number as your actual age, InsyaAllah. Who knows right? 🙂 I wish you for longevity so that you will be able to give more to the unfortunate, constant good health so that you will be able to pray more to Allah and perform more good deeds, better faith and taqwa, be a great son, brother, husband and father whom will be an inspiration to your own children. I wish you happiness, success and all your dreams would come true. May you are always under Allah’s guidance and blessing, Amin. We love you much. And please or should I say must (ugut ni! berani lah kalau tak, kan?) loves us extra much in return hihihi 😀

PS – Btw this entry was done on last Thursday, July 15th, 2010. I xletak recipes for the cake and chicken chop but if anyone nk bgtau later I bagi.

This site uses Akismet to reduce spam. Learn how your comment data is processed.

“Indeed. Allah knows the unseen of the heavens and the earth. And Allah is seeing of what you do.” (49:18)